Skip to content
Vikki Harrison-Edwards, My journey into Acupuncture

I became an acupuncturist after experiencing its amazing effects for myself. I have had osteoarthritis in my knee’s since my early teens, causing a range of symptoms including joint pain, stiffness, joint locking and instability. This led to me being prescribed a cocktail of pain-killers and undergoing an operation which led me not to be able to do the things I enjoyed, such as taking part in exercise; going to music festivals or gigs were I had to stand for long periods and even going out for a nights dancing would cause me pain.

I got to a point where I was taking such a strong dose of painkillers I felt like a zombie. Something had to change, my consultant kept telling me to strengthen the muscles surrounding my knee to help keep the joint more stable, but despite trying, it felt impossible due to the pain!

Then I discovered acupuncture. I have to admit I was sceptical how tiny needles could help with the pain in my knee. By that stage I’d have tried anything. Even so, at my first appointment I lay on the couch feeling cross with myself for being gullible enough to even try this “mumbo-jumbo”, as I thought of it.

You can probably guess what happened. It worked. Brilliantly. Within a few months the pain had reduced, so much so, I could begin to train at the gym.

I am mostly pain-free now, and still training at the gym, which I love. I was able to train throughout both my pregnancies and have even completed “men’s health survival of the fittest”: a 10k urban obstacle course.

So, I got my life back again. I was delighted and profoundly grateful – and despite my initial scepticism, I was a complete convert to acupuncture.

Since my first experience of acupuncture, I have had treatments for various conditions including migraines and various aches and pains caused by training!

After the death of my dad in 2007, I needed a complete career change. I previously worked as an ecologist, undertaking Bat, Newt and Dormouse surveys! How acupuncture worked had always intrigued me. Therefore, in 2010 I enrolled at the Northern College of Acupuncture in York, one of Europe’s most respected Chinese Medicine teaching institutions and studied Traditional Chinese Medicine (TCM) acupuncture, western biosciences & modern research methods.

I graduated in 2013 with a 2nd class honours degree, and I’m a member of the British Acupuncture Council (link to BAcC website), the UK professional body that holds acupuncturists to the highest standards of clinical excellence, safety, hygiene and professional development. 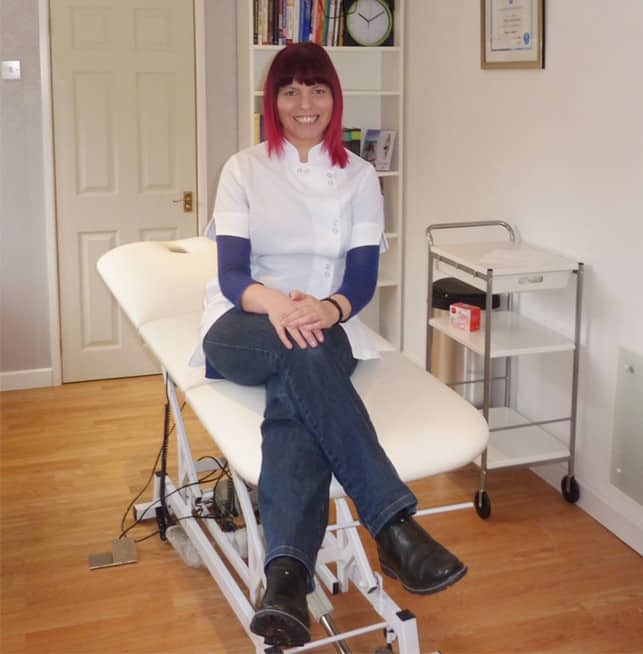 I currently live on the Hawkesyard estate near Rugeley, with my wonderful and supportive husband Dave, 2 children, Indigo and Hendrix, and my Horsefields tortoise called Thor.

Outside of work, running & sometimes climbing when I can, as my 2 small children take up a lot of my time. When I’m not looking after the kids, I’m a bit of a gym bunny. You will often find me lifting weights in my local gym.

I love music especially rock & metal and attempt to go to gigs or festivals when the time allows! I enjoy settling down on the sofa for a good book or film. I follow England & Gloucester in the Rugby and the Pittsburgh Penguins in the ice hockey.